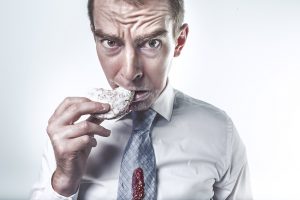 Body-focused, or sensorimotor, obsessions involve hyperawareness of automatic bodily activities (e.g., breathing or swallowing). Individuals with this type of OCD get “stuck” analyzing how often and how “completely” these processes have occurred.

As I have mentioned previously, one particularly distressing symptom of obsessive-compulsive disorder (OCD) can be hyperawareness of particular bodily sensations. Body-focused obsessions (also called sensorimotor obsessions (Keuler, 2011) or somatosensory obsessions) often feel intolerable and typically involve getting your attention “stuck” on thinking about or analyzing particular autonomic processes. Thoughts may become fixated on one’s breathing rate, heart rate, swallowing, blinking, eye “floaters”, or flickering of the visual field (Keuler, 2011). Sufferers frequently label the problem as conscious breathing/conscious swallowing/conscious blinking, obsessive breathing/obsessive swallowing/obsessive blinking, or compulsive breathing/compulsive swallowing/compulsive blinking. Although for most individuals these processes occur automatically below conscious awareness, individuals with this form of OCD find themselves acutely and frustratingly aware of their own bodily sensations.

People with these obsessive-compulsive symptoms attend to how often and how “completely” these processes have occurred. For example, individuals with respiration/breathing-related symptoms often try to consciously control their breathing rates, as well as how “fully” each breath is inhaled and exhaled. Obsessions and compulsions involving breathing, swallowing, and blinking are quite common in this form of OCD. However, other individuals may over-attend to fullness and other sensations in the bladder, stomach, or digestive system. Still others find their attention gets overly focused on the urge to burp or belch. Another different, distressing symptom involves analyzing the amount and frequency of eye contact with other people (Keuler, 2011). Doubt and uncertainty about how often and how intensely to make eye contact can lead to avoidance of other people, which may disrupt performance in work, school, and social settings. Additional examples of body-focused obsessions and compulsions include paying excess attention to how your tongue moves when eating or speaking, the timing of your speech, the amount of saliva in your mouth, the sound you hear when swallowing or chewing, how your teeth feel when your mouth is closed, or how your skin feels as it brushes against your clothing.

Although compulsions associated with these symptoms often involve consciously controlling these processes, mental rituals occur as well. These include repeating certain words or phrases in one’s head, counting, intentionally thinking “positive thoughts” to counteract “negative thoughts”, or engaging in “figuring out” rituals. In this way, sensorimotor OCD is similar to Pure-O OCD. Because these types of symptoms differ from “classic” OCD symptoms, diagnosis is often delayed because many individuals (and their therapists) do not understand that these symptoms reflect underlying OCD.

Understandably, individuals suffering from body-focused, sensorimotor OCD become desperate to redirect attention away from these processes (Keuler, 2011). However, attempts to forcefully distract or redirect attention are often ineffective. Most individuals find that the more they try to actively push their awareness onto something else, the more their awareness becomes locked on their symptoms. This can result in extreme anxiety, distress, and panic. Life may come to feel upsetting, intolerable, and out-of-control.

Subsequent posts will discuss core fears related to body-focused obsessions and compulsions, as well as treatment strategies for reducing these symptoms. As is the case for other types of OCD, evidence-based treatments consist of exposure and response prevention (ERP).