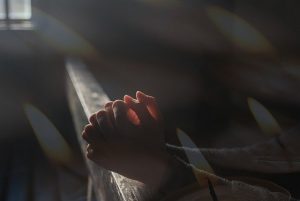 Scrupulosity is a form of religious OCD that often involves having blasphemous or unacceptable thoughts about God.

Scrupulosity is a form of obsessive-compulsive disorder (OCD) characterized by religious and/or moral obsessions. Scrupulosity can sometimes be difficult to recognize because even within a single faith community, religious beliefs and practices vary widely. There is no singular belief or behavior that is diagnostic for scrupulosity.

Instead, scrupulosity is best regarded as a pattern of beliefs and behaviors associated with excessive worry about having committed a sin or engaging in immoral acts. Concern may focus either on thoughts or actions already taken or the possibility of committing sins in the future. This results in significant emotional distress, guilt, and despair.

Scrupulous individuals also worry about the sinfulness of having bad thoughts. This experience is very similar to individuals with OCD who experience harm-related obsessions (e.g., the fear of harming a child or loved one). People with scrupulosity often wonder why they’re having bad thoughts and worry that these thoughts have special meaning. They also mistakenly assume that they wouldn’t be having these thoughts if the thoughts weren’t true.

Because the sinfulness of thoughts is discussed in the Bible and other religious texts, many scrupulous individuals take this as “proof” that they should be able to control their thoughts at all times. For individuals who hold this belief, it is especially important that treatment includes steps related to belief clarification. Treatment of scrupulosity may also include consultations with religious professionals. When I treat individuals in South Florida (Palm Beach Gardens, West Palm Beach, Jupiter) with scrupulosity, I typically incorporate these elements in my treatment plan.

Feared consequences associated with scrupulosity often focus on damnation, estrangement from God, making God angry, or living an empty existence. There may also be the fear that one may “corrupt” others or experience uncontrollable feelings of guilt forever.

In order to prevent these outcomes from occurring, individuals with religious scrupulosity engage in a variety of rituals. These compulsions typically involve taking preventative action to keep a sin from occurring or engaging in some type of restoration ritual to repair their relationship with God. People with scrupulosity also commonly engage in a variety of mental rituals.

How is Scrupulosity Diagnosed?

Diagnosis of scrupulosity is complicated because symptoms of scrupulosity exist at the intersection of spirituality and mental health.  This results in symptoms of scrupulosity frequently going undetected. Psychologists may not sufficiently inquire about one’s faith tradition and overlook scrupulous symptoms.  Similarly, religious professionals may have less experience in recognizing signs of obsessive-compulsive disorder (OCD).  Parents of scrupulous children often take pride in their children’s seemingly strong faith and fail to recognize that their “faith” is predominantly fear-based. Because of these challenges, it is especially important to foster better public awareness about scrupulosity and how it relates to OCD.

Here are some common obsessions and compulsions associated with scrupulosity.  Because many of these behaviors are normal within certain faith traditions, it can be useful to consult with an OCD specialist if you’re concerned about these (or other) symptoms.

Remember, effective treatment for scrupulosity is based on exposure and ritual prevention, a type of behavioral therapy that was designed to treat obsessive-compulsive disorder (OCD). However, ERP will typically be augmented with steps related to belief clarification.

Questions? Comments? Do you experience scrupulous symptoms that were not mentioned above? Sound off below.